Portrait of Olga in the Armchair, 1917

Still-Life with a Pitcher and Apples, 1919 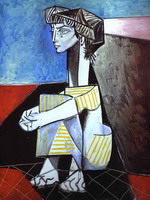