In April 1949, the International Peace Conference took place in Paris. It was decided to use Picasso’s lithograph depicting a dove to decorate the hall ceiling. The piece later acquired worldwide fame. During the Congress, one day (April 19) was particularly exciting for the artist: Fran?oise Gilot was supposed to have a second child; Pablo really wanted it to be a girl. As witnesses note, Picasso was restless and kept calling to the hospital in Vallauris to inquire about the state of the women in labor. Finally, he was told the good news: Fran?oise gave birth to a girl. Picasso did not hesitate in choosing the name: Paloma, Spanish for dove.

For Pablo, Paloma’s lively disposition was inexhaustible source of inspiration. On most of the paintings, she is depicted playing (“Paloma with Celluloid Fish” 1950, “Child playing with a truck” 1953), often in company with her mother and older brother, Claude (“Claude and Paloma playing” 1950, “Fran?oise Gilot with Claude and Paloma” 1951, and “Claude and Paloma” 1952). Paloma’s portraits emit immediateness – is as if the girl has stopped for a movement fascinated by her father’s brush and is about to rush back to play. (“Paloma a l’orange” 1951, “Paloma in Blue” 1952)

The girl has been surrounded by artists and intellectuals since she was little. “Art was not special for me, it was part of everyday life” – she later recalled. The childhood largely determined the entire course of life for this woman. After graduating from the University of Paris she worked as a costume designer and stylist in a theater. Afterwards she moved to Greece, engaging in jewelry design. In 1974, Paloma starred in the erotic film “Immoral Tales” by Polish director Walerian Borowczyk, gaining herself a scandalous prominence. In the late 70's Paloma Picasso was known as a frequenter of the legendary New York disco club Studio 54, often attended by such celebrities as Andy Warhol, Mick Jagger and many others. In 1980 Paloma signed a contract with Tiffany & Co jewelry company. Even then, Paloma Picasso’s name was a well-known jewelry brand, eventually expanding to cosmetics, perfumes and clothing. With Paloma and Claude
1955 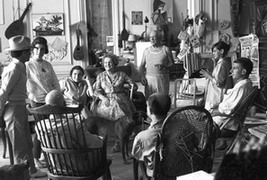 Paloma and Claude, Children of Picasso, 1950