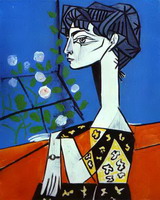 Flowers and bust d`homme with umbrella, 1968